Alabama’s Dylan Moses: Played much of season with torn MCL

Alabama’s Dylan Moses: Played much of season with torn MCL 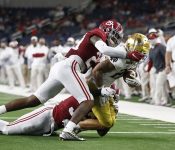 TUSCALOOSA, Ala. — Alabama linebacker Dylan Moses says he played most of the season with a torn meniscus. Moses said on Monday, a day before the Crimson Tide’s second pro day workouts for NFL teams, that he had knee surgery on Feb. 9. The injury was diagnosed after Alabama’s national championship game win over Ohio State. Moses, who didn’t specify which knee was hurt, led Alabama with 80 tackles and ... read more
Source: collegefootballtalk.nbcsports.com
2 weeks ago
This entry was posted on Monday, March 29th, 2021 at 10:52 pm