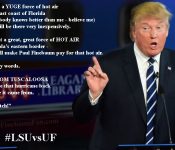 Republican Presidential Nominee, Donald Trump, has offered this solution to the cancellation of this Saturday’s SEC college football game between The University of Florida and Louisiana State University. The game was scheduled to be played in Gainesville but has been indefinitely postponed due to the imminent threat of Hurricane Matthew. Paul Finebaum announced before today’s official cancellation of the game that ESPN’s SEC Nation and crew would not be in ... read more
Source: FinebaumFan
3 years ago
This entry was posted on Thursday, October 6th, 2016 at 11:48 pm