Dorktown: Sometimes MLB players should only play at a certain time of day

Dorktown: Sometimes MLB players should only play at a certain time of day 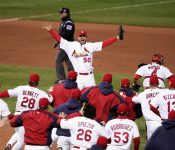 Getty Images Stark differences in player production based on time of day, as demonstrated by a lot of charts In 2006, the St. Louis Cardinals played 105 games at night; and when they did, they were terrible at pitching — their 5.14 ERA was dead last in the National League. But in the 56 games they happened to play when the Earth was facing the sun, they ... read more
Source: SBnation.com
3 days ago
This entry was posted on Tuesday, February 23rd, 2021 at 5:00 pm