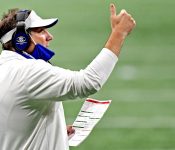 GAINESVILLE, Fla. — Florida football coach Dan Mullen received a three-year contract extension worth an additional $1.5 million annually following a disappointing season that closed with a three-game losing streak and included several public relations missteps and NCAA sanctions. The Gators released Mullen’s contract in response to a public records request. He signed the amendment in early May. Mullen, 49, will make $7.6 million in 2021, up from $6.07 million ... read more
Source: collegefootballtalk.nbcsports.com
3 weeks ago
This entry was posted on Tuesday, June 1st, 2021 at 5:16 pm