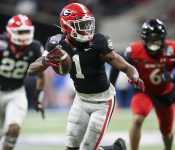 ATHENS, Ga. — In a potentially major blow to one of the nation’s top teams, Georgia receiver George Pickens will require knee surgery after being injured during spring practice. A school statement said Pickens, projected as one of the nation’s top receivers going into the 2021 season, sustained the injury to his right knee during a non-contact drill. An MRI confirmed damage to the anterior cruciate ligament. The school said ... read more
Source: collegefootballtalk.nbcsports.com
3 weeks ago
This entry was posted on Thursday, March 25th, 2021 at 6:03 pm