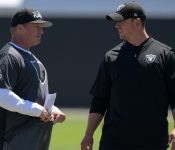 EVANSTON, Ill. — Northwestern hired Las Vegas Raiders defensive backs coach Jim O’Neil as defensive coordinator on Wednesday. O’Neil spent three seasons on Jon Gruden‘s staff in Oakland and Las Vegas, the past two as defensive backs coach. He has more than a decade of NFL coaching experience, including stints as defensive coordinator for the Cleveland Browns (2014-15) and the San Francisco 49ers (2016). O’Neil said in a statement he ... read more
Source: collegefootballtalk.nbcsports.com
2 weeks ago
This entry was posted on Thursday, February 11th, 2021 at 7:32 pm