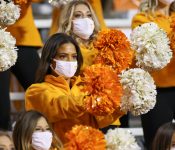 KNOXVILLE, Tenn. — Tennessee has dismissed freshman quarterback Kaidon Salter from the football team. The school made the announcement in a two-line statement and gave no details behind the decision. The Knoxville News Sentinel reported that Salter and freshman offensive lineman Amari McNeill were charged with misdemeanor drug offenses after an early morning traffic stop. Salter, a former four-star recruit, had also been suspended during spring practice. He had been ... read more
Source: collegefootballtalk.nbcsports.com
1 month ago
This entry was posted on Friday, June 25th, 2021 at 4:24 pm