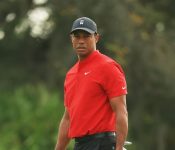 Photo by Mike Ehrmann/Getty Images Woods is in surgery with “multiple leg injuries,” according to his agent. The Los Angeles County Sheriff’s Department (LASD) announced on Tuesday afternoon that golfer Tiger Woods was involved in a car accident early Tuesday morning in Rolling Hills Estates. Woods’ accident is still being investigated by the LASD; however, the announcement included the detail that the 45-year-old was involved in a ... read more
Source: SBnation.com
2 days ago
This entry was posted on Tuesday, February 23rd, 2021 at 8:22 pm