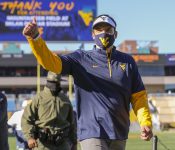 MORGANTOWN, W.Va. — West Virginia coach Neal Brown has received a two-year contract extension through the 2026 season, athletic director Shane Lyons announced. Brown has coached the Mountaineers to an 11-11 record in his first two seasons, including a 6-4 mark in 2020. He had four years remaining on his original contract. Brown was hired in January 2019 to replace Dana Holgorsen after going 35-16 in four years at Troy. ... read more
Source: collegefootballtalk.nbcsports.com
3 weeks ago
This entry was posted on Thursday, April 22nd, 2021 at 9:54 pm