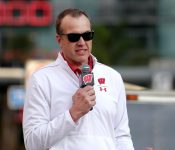 MADISON, Wis. — Chris McIntosh played for Barry Alvarez on two of Wisconsin’s Rose Bowl championship teams and spent the last few years working as his right-hand man. Now he is about to succeed his former coach and boss as the Badgers’ athletic director. Chancellor Rebecca Blank announced that McIntosh will take over when Alvarez finalizes his retirement. The 74-year-old Alvarez announced April 6 that he was stepping down, and ... read more
Source: collegefootballtalk.nbcsports.com
2 weeks ago
This entry was posted on Wednesday, June 2nd, 2021 at 4:21 pm