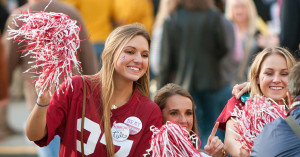 Alabama fans are on top of the world after defeating the Clemson Tigers in the second College Football Playoff Game Jan. 11, 2016.

We were hoping for a great National Championship Game, and Clemson–Alabama did not disappoint!

Deshaun Watson and Clemson fought hard to the bitter end, but Bama’s big plays were just too much for too long. The Crimson Tide earned its fourth national championship since 2009 with the final score of 45-40.

We’ll be doing quarterly drawings for a Polar Bear Cooler, so sign up at https://thekickoffstore.com/coolest-fan-contest/and watch our Facebook Page for announcements of winners so you can tailgate this summer and fall while staying the coolest fan at the stadium.

This time last year, everyone was talking about how Ohio State were favorites to dominate. Now there’s speculation that Clemson is likely to start 2016 ranked No. 1 with Watson a favorite for the next Heisman. The Crimson Tide will probably lose this year’s winner, Derrick Henry, and a lot of other talent, along with defensive coordinator Kirby Smart, who was named Georgia’s coach, but Saban never seems to have any problem reloading.

To order our new Basketball newsletter, The Tipoff, call us at (423) 267-0953. The cost is $12 for 12 weeks of the most weekly comprehensive information on college basketball schedules, scores and results available on a weekly basis.

The latest issue of The Kickoff, our 17th issue of the season, includes our Final Top 25, with Alabama, Clemson, Stanford, Ohio State and Oklahoma at the top. We include superlatives and upsets, plus trends from throughout the season.

The issue includes stats and scores from all of the Bowl games and our final Power Ratings from the results. How does your team stack up among all 128 FBS schools?

“We would like to thank everyone for helping to make this, our 65th year in publication, a successful year,” said Tommy Duff, Editor of The Kickoff. “The Kickoff would not exist without your continued support. We look forward to adding even more improvements in 2016, which we have already started mapping out. See you next fall!”

With the College Football Playoff done, the slate is wiped clean with all teams making a fresh start and their eyes on the prize this fall. Over the next several months, bragging rights will be redeemed and hopes build with potential.

These questions are part of what makes college football great: the anticipation of what can be achieved with the right talent, team chemistry and coaching. The Kickoff predicts which prospects have the potential to be future stars, elevate programs, or at least contribute right away.

The Kickoff puts out 6 monthly issues between February and July covering recruiting, spring practice and transfer. We hope that if you haven’t already, you will invest in a full year subscription (23 issues for $28) to The Kickoff so you can have our information at your fingertips as momentum builds for another great year of college football!

To subscribe to The Kickoff, visit https://thekickoffstore.com/subscriptions/individual/ or call us at (423) 267-0952.

To talk to us about using The Kickoff as an advertising tool to reach your existing and new customers, visit https://thekickoffstore.com/subscriptions/business/ or call (423) 267-0952.