Ohio State (No. 2 in the Kickoff Top 25, No. 3 in the College Football Playoff rankings) faces a test this weekend as it hosts Michigan State (No. 11 on the Kickoff Top 25, No. 9 in the CFP rankings) in one of our Kickoff Games of the Week. The Buckeyes lead the series 29-13, and we expect them to prevail again this week. We’ll see, though, as the kickoff is scheduled for 3:30 pm, televised on ABC. 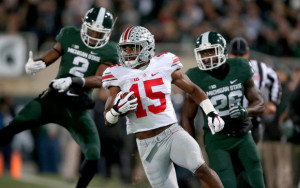 An Ohio State loss would shake things up in the Playoff picture. ESPN’s College GameDay will broadcast from Columbus Saturday morning, the first time on campus since 2010. Clemson (10-0) and Alabama (9-1) are ahead of Ohio State with Notre Dame (9-1) immediately trailing.

The Kickoff Top 25 has Oklahoma State (10-0) ahead of the Fighting Irish in the No. 4 spot. Their game against Baylor (8-1, No. 10) is our other Game of the Week. When hosting, as they are Saturday, the Cowboys have a 12-4 record, and Oklahoma State leads the series all-time 19-14. A look at the Kickoff Power Ratings suggests the Bears may leave disappointed, which would end their playoff hopes. Kickoff is at 7:30 PM in Stillwater with the game airing on FOX.

If you subscribe to The Kickoff, you have a powerful resource at your fingertips for making your weekly picks. It’s not too late to subscribe to the rest of the 2015 college football season. A 6 week subscription, which includes this week’s issue, is just $7.08. As mentioned above, there’s still a lot of football left to play. Visit http://bit.ly/1Hbl1Rr to get a prorated subscription or call us at (423) 267-0953 if you prefer to do it that way.

In this week’s issue of The Kickoff, we looked at last weekend’s upsets as Arkansas topped LSU, Oklahoma beat Baylor, Oregon topped Stanford, and Missouri beat BYU, among others. The Kickoff Thermostat showed Pittsburgh, Oregon and Iowa on the rise, with the stock of Auburn, Duke and Stanford falling.

The Kickoff looked at the overall trends through last week, listed the complete FBS and select FCS schedules and standings, examined the average points allowed by teams and strength of schedule, broke down the conferences’ winning percentages, and offered Power Ratings for this weekend’s games. We also looked back to the rankings in November 1963, when Texas led the nation with a 9-0 record. In News and Notes, we recognized the superlatives of Ezekiel Elliot, Brandon Radcliff, Jake Ruddock, Derrick Henry, Jehu Chesson, Jordan Howard, Alex Collins, and Sterling Shepard.

This holiday season, The Kickoff is offering an Earlybird Special for those who get the jump on college football in 2016. For that relative who can’t get enough of the game, you can buy him (or her) an annual email/PDF subscription, which includes six pre-season issues and 17 weekly issues next fall – and you’ll get an email/PDF version for yourself or someone else at no additional charge! The cost is just $28 for 23 printed issues in the Email/PDF version.  As one of the most accurate prognosticators since 1951, The Kickoff is the perfect gift for someone who loves college football as much as you do! Visit https://thekickoffstore.com/product/buy-one-get-one-free/ to get the Holiday Special.

Watch this week for our announcement of an exciting new contest for new newsletter subscribers as well as existing subscribers.