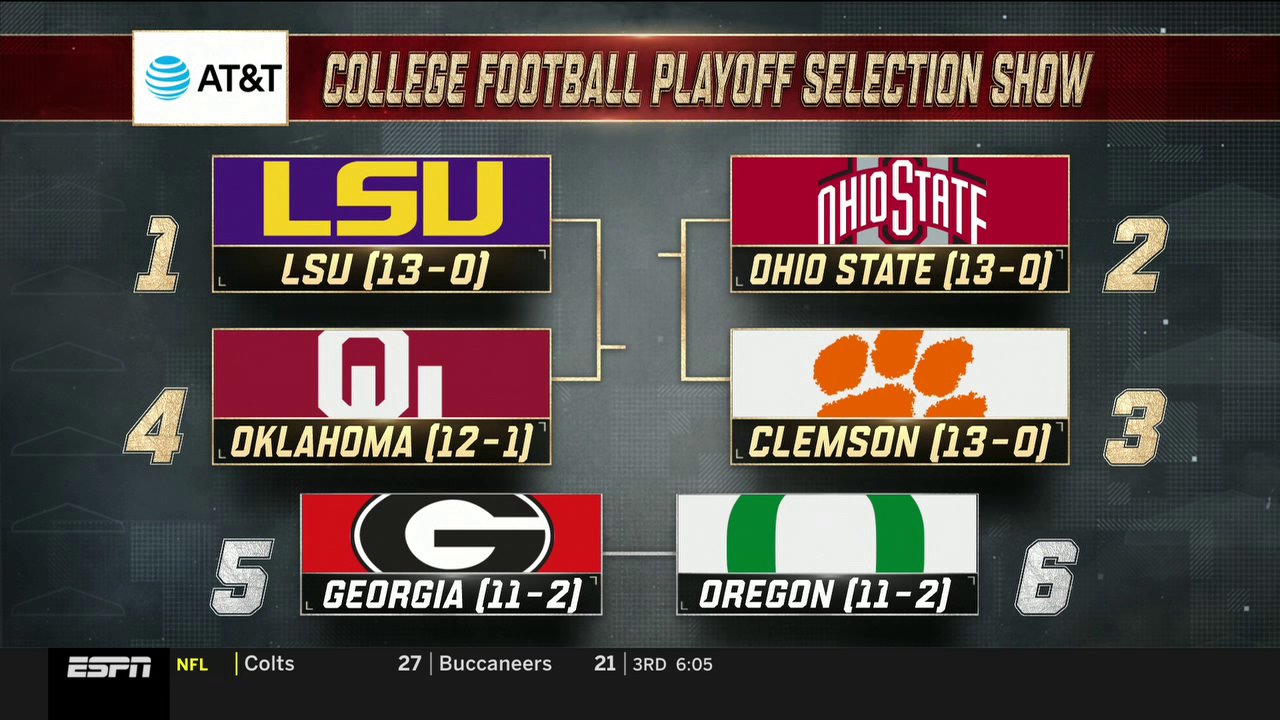 This season’s Playoff Semifinals will take place on Saturday, December 28, 2019. The LSU Tigers are the top seed against #4 Oklahoma at the Chick-fil-A Peach Bowl at Mercedes-Benz Stadium in Atlanta. Ohio State at #2 takes on #3 Clemson at the PlayStation Fiesta Bowl at State Farm Stadium in Glendale, Arizona.

The Georgia Bulldogs at #5 and Oregon at #6 are just on the outside of the semifinal playoff. The Kickoff’s own poll mirrors the top 4, but we listed Oregon at #5 and Georgia at #6. Editor Tommy Duff said this was attributed to Oregon being their conference champions, as well as Georgia’s earlier loss in overtime to South Carolina.

These rankings are the sixth and final rankings that will determine the next College Football Playoff.

Where will your team be playing?

The Kickoff will list the 2019-20 college football bowl schedule once the events are finalized.

An exciting close to the regular season

After dominating Georgia in the SEC Championship game on Saturday, LSU earned the top spot on the Associated Press poll, followed by Ohio State, which struggled in the first half against Wisconsin, which fell one spot to #11. Duff said the Buckeyes averted a disastrous upset by dominating the Badgers after halftime adjustments.

Oklahoma moved up two spots to #4 in the AP and Coaches Poll. The defending national champs, Clemson, are 13-0 and ranked third by both polls.

“Clemson hasn’t played anybody all year, but they are going to be very tough to beat,” Duff said. “LSU wasn’t surprising. We saw that coming a mile away.”

Losses to LSU and Auburn have put Alabama in the unusual position of sitting out the semifinals for the first time since the College Football Playoff system was introduced. Adding insult to injury, the Associated Press poll put the Tide as tied at #9 with Auburn in the final poll before bowl season. On the College Football Playoff selections announced Sunday, Auburn came in at #12, one spot ahead of Alabama at #13.

Duff called it “kind of ridiculous” that the Crimson Tide would not be ranked higher by the College Football Playoff committee.

“Going by their whole season, Alabama should’ve ranked higher. At the same time, they are a different team without Tua, which should be considered for good or bad. Bama didn’t play a lot of ranked teams, but they played LSU close and the Iron Bowl was a weird game. No disrespect to Auburn, they won on the field. I just don’t see most of the teams ranked ahead of Alabama being a better team. If you played a round robin of the top 15 teams, Alabama would end up with a winning record,” Duff said.

His performance in the SEC Championship game appears to put LSU Quarterback Joe Burrow in the position to win the Heisman.

“It won’t be close at all,” Duff predicted. “The vote will be split below him, which may see Jalen Hurt jump up to #2 over the Ohio State trio of Fields-Young-Dobbins.”

“Norvell is a good hire. He’s proven he can do well relating to players and should do well in recruiting for the Seminoles. Kiffin Is a good fit at Ole Miss. He’ll do well there, or at least improve the talent level,” Duff said.

Elsewhere, Rutgers fired Chris Ash and rehired Greg Schiano, Chris Peterson stepped down at Washington, Boston College fired Coach Steve Addazio. Vanderbilt coach Derek Mason will return for a seventh season despite speculation he was going to get fired after a 2-8 season.

No word yet on who Arkansas will hire to replace Chat Morris after he went 4-18 in two seasons in Fayetteville.