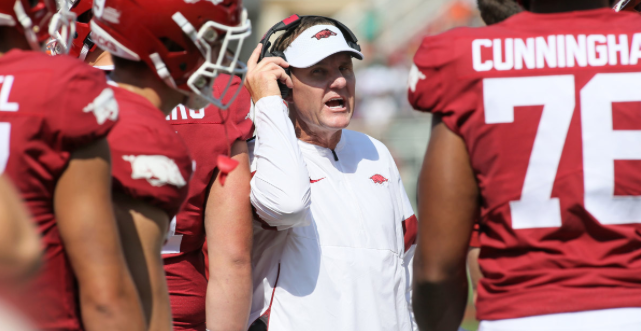 Are Coaches Being Given Enough Time to Turn Programs Around?

While 4-18 is unacceptable for any self-respecting college football program, especially one in the proud Southeastern Conference, the move does come across as a bit aggressive to not even let Morris finish the season, putting tight ends coach/special teams coordinator Barry Lunney Jr in charge in the interim.

Losing 45-19 to Western Kentucky as the latest in a seven-game losing streak hurts.

The Razorbacks have an open weekend before traveling to play an LSU team ranked #1 in the country after taking down #2 Alabama in Tuscaloosa this past weekend.

It was less than two seasons ago when Bret Bielema got kicked to the curb after going 29-34 in five seasons, the school still owing him about $1.9 million. Arkansas owes Morris about 70% of his remaining compensation on a six-year contract. What have boosters gotten for that investment? The Hogs have lost 17 straight SEC games dating back to the end of the 2017 season.

Whenever there’s a coaching change in Fayetteville, Auburn’s Gus Malzahn is mentioned as a favorite to succeed the fired coach. In the past, Malzahn has used this as leverage to increase his salary on the Plains. But as the Tigers have struggled this year (by SEC West standards), message boards have lit up with calls to replace Malzahn.

If Auburn, which put a beating on Arkansas a couple of weeks ago, adds losses to Georgia and Alabama over the next four weeks, the Gus Bus could conceivably pull out of town. Auburn likely won’t get fired unless the team does horribly because Malzahn (back when the Tigers beat Georgia and Alabama in the same season) signed a seven-year, $49 million contract extension – complete with a massive buyout clause that won’t dip below eight figures until 2023. The team’s highly touted backup left the team after Malzahn kept his talented freshman, Bo Nix, in the LSU game despite the young man struggling to produce offense.

The pundits on ESPN’s College GameDay sounded off on Willie Taggart’s mid-season dismissal at Florida State. They asserted that the culture in Tallahassee must be more toxic than first thought if Taggart faced such an uphill battle and wasn’t even given much of a change to recruit his way to an improved program.

The Seminoles view their early entry into the coaching market as an advantage in hiring a replacement who’ll be able to turn the program around dramatically and win national championships sooner rather than later.

Coaching changes always impact recruiting. It will be interesting to see which players change their commitments following these dismissals and who they might get instead.

Even the mighty Alabama Crimson Tide faced turmoil in the 2000s before Nick Saban turned Tuscaloosa back into a natty championship factory. People forget how much they struggled to replace the Legend “Bear” Bryant between 1983-2006 with Ray Perkins, Bill Curry, Gene Stallings, Mike DuBose, Dennis Franchione, Mike Shula, and Joe Kines trading the big seat before Saban came to town. Stallings was the only one who came close to living in Bryant’s shadow with a championship in 1993.

What do you think? Will it make any difference if Arkansas and Florida State get early starts in the competition for new head coaches?
Should they have given Morris and Taggart more time?
Who will be next in line to get fired?

The other huge news this weekend was LSU beating Alabama in Tuscaloosa to remain undefeated. In the new AP Poll, fell two spots from #2 to #4. Ohio State was #2, Clemson at #3. They are joined by #7 Minnesota, and #12 Baylor as the only remaining undefeateds in the Top 25.

Auburn, ranked #13, will have a chance to ruin Playoff hopes for #5 Georgia when the two teams play this weekend. That oldest rivalry in college football is one of our games of the week. LSU will play unranked Ole Miss at 6 pm. The Buckeyes play Rutgers at 2:30. Clemson plays #19 Wake Forest at 2:30. The Tide play Mississippi State at 11 am.

Subscribe to The Kickoff so you don’t miss any of the action.