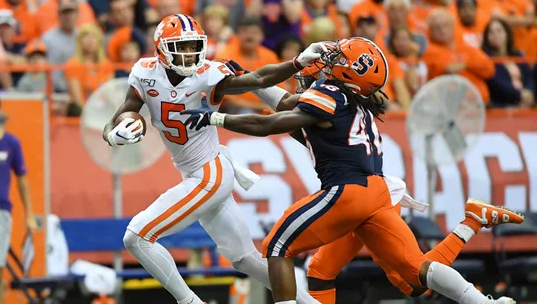 After 3 weeks of college football, it increasingly looks like it’s going to be a repeat of Clemson vs Alabama, Tua Tagovailoa vs Trevor Lawrence.

So routine it has become that Alabama has resorted to using smartphone games to encourage students to stay in the stadium seats once the Tide starts running up the score against the likes of Duke, New Mexico State, and Western Carolina. The Tide has come a long way since Louisiana-Monroe left Bryant-Denny with the win in 2007, but at least Clemson can 30 unanswered points on Nick Saban.

Absent some change, it looks like Alabama will again play Georgia for the SEC title, but LSU could disrupt that pattern. The real suspense is in which teams will make the other two College Football Playoff spots.

Jalen Hurts continues to impress as a transfer at Oklahoma with 4,100 passing yards, 1,700 rushing yards and a combined 60 touchdowns against Houston, South Dakota and UCLA. Ohio State is impressing in spite of a head-coaching and quarterback changes this year. Notre Dame and Wisconsin are also making good cases for Playoff inclusion. Heading into Week 4 of the season, the AP Top 25 still includes 21 undefeated teams; Texas is the top-ranked one-loss team at #12.

Things are also about to get real for #8 Auburn, which beat #11 Oregon in Week one before victories over Tulane and Kent State. This weekend, the Tigers travel to play #17 Texas A&M, then face a grueling schedule that includes Mississippi State, Florida, Arkansas, LSU, Ole Miss, and Georgia, getting a chance to breath with Samford before the annual Iron Bowl against Alabama. It will be interesting to see whether Quarterback Bo Nix has enough confidence and experience under his belt to lead them through that gauntlet.

Iowa is another under-the-radar 3-0 team that could shake up the College Football Playoff race, although a major obstacle could be that they’ve only moved up two spots from preseason #20 in the AP Poll.

The top-ranked teams playing lesser opponents have satisfied the need to run up the score to avoid losing their spot in the rankings. The Fighting Irish scored 66 points on New Mexico. The Georgia Bulldogs shut out Arkansas State with 55 points. LSU ran up 64 points against Northwestern State. All hoped that if Clemson struggled against Syracuse or Alabama faced a real challenge from South Carolina, huge margins of victory might push them into the higher echelons.

Stanford had preseason buzz, but they’ve lost two straight and are on a downward trajectory on the Kickoff Thermostat. UCF beat them 45-27 on Saturday.

Speaking of stuggling teams, the Tennessee Vols finally won a game against UT Chattanooga – it must have felt good for fans to watch them shut out a team 45-0 — but they are third in the SEC East and projected to be favorites in only two remaining games this year.

Last week’s #4 LSU drops to #6. Georgia and Oklahoma jump ahead to #4 and #5. Florida moves from #9 to #8 and Notre Dame advances from #10 to #9. Michigan falls from #8 last week to #10 this week after looking merely decent against Middle Tennessee and very shaky in a near loss to Army.

Games of the Week

In this week’s issue, we preview Utah at Southern Cal, Notre Dame at Georgia, and Michigan at Wisconsin.

Also in this week’s Kickoff, we look at overall trends through last week, examining the performance for home and road favorites.

We still have lots of great college football left this season. Take advantage of The Kickoff’s Buy One Get One Free special before it’s gone!