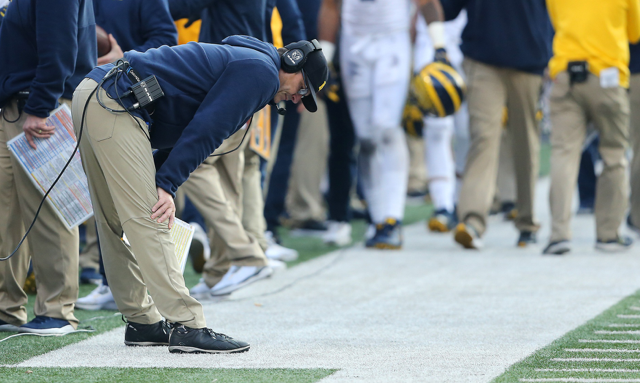 The SEC fares well in the AP Top 25 rankings for Week 5. Alabama, Georgia, LSU, Auburn, Florida, and Texas A&M all remain in the hunt.

No. 3 Georgia overcame #10 Notre Dame, which fell 3 spots in the polls.

Oklahoma slipped one spot to #6 as Ohio State moved up to #5.

Of course, The Kickoff offers our own Top 25 rankings based on our take. You can see that and a whole lot more in Issue 5.

Also in issue 5, we have a conference breakdown so far, news and notes, the Kickoff Thermostat, Division 1A FBS expanded standings, average margin of victory leaders, Kickoff times and television schedules for the week, opening over/under odds and our picks, opening consensus odds and our picks, our Power Ratings for this week’s games, and a lot more!

We’ve played enough football to have a pretty good sense of who teams are now. The front-runners remain fixed with Clemson, Alabama, Georgia, LSU, Oklahoma, Auburn, Wisconsin, and Florida all undefeated. Things are also looking up for USC and Wake Forest.

The website Sportsnaut points out that there are discipline problems for Nebraska that have led to outcomes like losing 11 turnovers, which ranks second-worst in college football, including four lost fumbles in Week 4 against Illinois.

Stanford is also a disappointment this season, now 1-3 on the season, with a rushing offense that ranks 109th in the nation.

The Texas defense is another letdown from expectations. LSU put up 471 yards and four touchdowns against them.

Saturday’s loss against Florida shows it’s going to be a long season for Tennessee fans.

Arkansas had a bit of a meltdown in Week 4 against San Jose State as the defense gave up over 500 yards.

We all knew South Carolina was going to lose to Alabama, but they could go 1-6 with a loss to Missouri and the teams coming up over the next week weeks.

Take advantage of the Interactive new features in your PDF digital newsletter. Such as the ability to click on the name of a school to point your web browser to that team’s official website for individual stats or to buy game tickets. And check out our YouTube channel being updated throughout the season.

If you are already a subscriber, we thank you. If not, you still have a little time left to take advantage of The Kickoff’s Buy One Get One Free special!