The Basics of How to Bet on College Football

Earlier this month, the U.S. Supreme Court struck down a 1992 federal law that banned commercial sports betting in most states, thus opening the door to potentially profound changes to sports wagering across the USA. The Professional and Amateur Sports Protection Act stopped states from authorizing sports gambling, arguing that such a law safeguarded the integrity of sports, but the SCOTUS said the law was unconstitutional.

Those happy to see the ruling include more than just gambling companies. Television networks like ESPN expect fans to have a more deeply vested interest in games, which could translate to higher ratings. The strongest argument in favor of legalized sports gambling across the country may be that it happens anyway, so it can at least be regulated and generate money for government services.

Learning How to Bet on NCAA Football

In NCAA football money betting, you place either a side bet, totals, or money line bet. You might also get into placing a prop bet or parlay. Below, we explain each of these in more detail…

The Point Spread, aka, “the spread” or “the line”, describes an adjustment to the final score designed to attract equal money to both sides of a wager. Rather than just betting on who’ll win or lose, which can be obvious in lopsided matchups, the point spread gives points to one team – a head start, if you like — taking away points from the other. This process of “handicapping” imagines that a more dominant team will blow out an inferior opponent by more than X amount of points or that the lesser team will prevent the dominant one from winning by more than those amount of points. Simply put, the spread is the number of points by which the supposed better team is favored over the underdog, and it’s possible to win by betting on the team that loses.

Each team is given a point total by the oddsmaker that can either be added or subtracted to the final score, thus factoring into if the bet was won or lost.

The point spread for the national championship game was:

The (-) before the 4 indicates that the Crimson Tide were the point spread favorites.

A “Side Bet” places a wager on one particular team to “beat” the spread, i.e., predicting that the more dominant team will beat the inferior opponent by more than the number of points. If you bet on Alabama -69 (where Bama has to win the game by more than 69 points), you’ve placed a side bet for the Tide.

A “Money Line Bet” takes the point spread out of it and simply chooses which team will win. Betting on the favorite to win costs more than betting on the underdog to prevail. You won’t find many money line bets on games with a high point spread involved.

As you can imagine, the game takes on an added intensity if you have money riding on the underdog to win and Jalen Hurts is struggling.

You will also see the term “Prop Bets” referring to gambling on whether certain things happen in a game. Things like who scores the first points in a game, what kind of score happens first (touchdown vs field goal, etc.), number of turnovers, etc.

When placing a bet, you should expect to pay a tax or commission to the sportsbook for placing a wager with them. It can pay to price shop for the best numbers and prices possible. We recommend further research to gain a better understanding of how sportsbooks work before you attempt to bet on NCAA football or any sport. 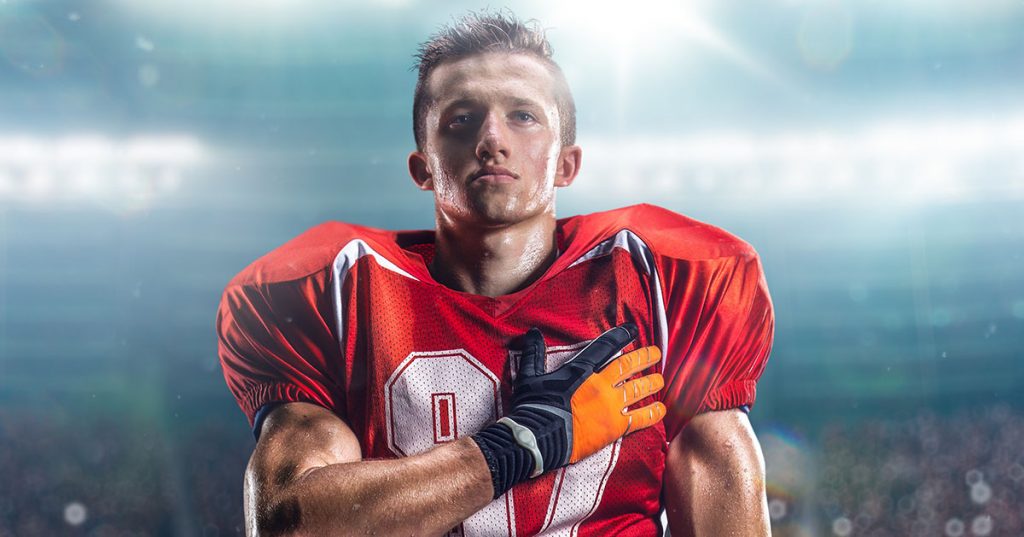 Is getting to bet on college football legally a good evolution of the sport or does it take away from the heart of “school spirit”? Do such things matter if you never attended any of the colleges you watch play every Saturday?

In response to the SCOTUS decision, the NCAA said it will temporarily suspend its current policy and allow states that condone sports gambling to host championship events. NCAA coaches, administrators, and staff are still not allowed to gamble on sports, nor are the more 460,000 athletes who compete in 24 sanctioned sports, including college football.

Legalized wagering may inevitably result in some sort of match-fixing scandal at some point, giving leagues incentive to monitor and flag any irregularities suggesting corruption.

From the standpoint of personal responsibility, it’s important to never gamble more money than one can afford to lose and to recognize the signs and stop when sports betting may stimulate addictive tendencies. If you have a gambling problem or know someone with a gambling problem, please call 1-800-522-4700.

How The Kickoff Incorporates NCAA College Football Lines into Our Coverage

Last fall, The Kickoff expanded from four to six pages, adding a wealth of information such as Opening Lines and Kickoff Recommended Picks. Our Kickoff Power Rankings Spreadsheet detailed our analysis of a number of factors including records, winning percentage, Power Rating, the strength of schedule, and other ingredients. Kickoff Editor Tommy Duff said the information was added to aid those with an interest in betting – whether the wagers were for money or for simple fun exchanging dares with a buddy.

Although The Kickoff provides information that can be a valuable resource for those wagering on college football games, it is important to note that our newsletter is not a sportsbook or oddsmaker setting the lines for people who will eventually book bets. Our newsletter serves only to offer data and analysis without any interest in the outcomes of games. We urge our readers to use our newsletter as part of their overall strategy and pool of resources for making their decisions.

How does The Kickoff incorporate these details in our newsletter? In Vol. 67, Issue #16, for example, The Kickoff listed Bowl Game Opening Lines, detailing such information as the “line favorite”, “line underdog”, “Kickoff Favorite Against the Spread”, and the “Kickoff Underdog Against the Spread”. These were followed by our recommended picks.

Use The Kickoff to Help Determine College Football Picks Odds

If one does choose to bet on sporting events, the Kickoff’s system of prognostication uses a proprietary formula that goes beyond what you get from most sportsbooks. We incorporate human analysis by experts in the game, taking it past mere algorithms and statistical analysis.

Since 1951, college football fans have trusted our newsletter to arm them with the information they need to get the most from the game, whether that’s meant betting on outcomes or simply gaining a better understanding and appreciation on football Saturdays.

For a limited time, you can share this valuable resource with a buddy, your boss, or – just in time for Father’s Day – dear ole dad. Take advantage of The Kickoff’s Buy One Get One Free special to start receiving 17 issues of our 6-page PDF newsletter in your email inbox beginning with the preseason issue this coming August. Learn more and place your order today!

To learn more about the SCOTUS ruling and how we got there, this ESPN article is insightful.