Week 3 Preview: An Infamous Rivalry Revived and an SEC Showdown 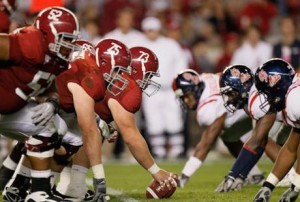 It’s already Week 3 of the College Football season with some great games ahead this weekend. The Kickoff Games of the Week are Georgia Tech at Notre Dame and Ole Miss at Alabama.

The Yellow Jackets enter the game ranked at No. 9 on the Kickoff Top 25 this week, jumping two spots from last week. The Fighting Irish, right behind them on our rankings, lead the series 27-6-1, including a 15-3 record when hosting. The teams are meeting as part of a deal with the Notre Dame and the Atlantic Coast Conference. This has been a heated rivalry over the years with Tech fans pelting visiting fans with fish during the sixties and seventies, as portrayed in the movie Rudy. Their last meeting was in 2007. It will be fun watching them battle it out again.

After beating Wisconsin and MTSU, the Crimson Tide (ranked No. 3) continues to look strong as they enter Conference play against the Rebels, who won their last two games 76-3 and 73-21 versus Tennessee Martin and Fresno State, earning a No. 15 rating on our Top 25. Without about 3.2 points difference on our Power Ratings, we expect Alabama to win this one. The Tide has history on their side, leading the series 24-1 when hosting Ole Miss and 48-8-2 overall since 1907. Ole Miss QB Chad Kelley was one of our superlatives for his performance last week as he went 19-24 for 360 yards and four touchdowns.

Bama’s bitter rival, Auburn, tumbled 10 spots in our Top 25 after struggling to beat FCS opponent Jacksonville State in overtime at home last weekend. We were as guilty as anyone for buying into the pre-season hype about the Tigers and Quarterback Jeremy Johnson as Playoff and Heisman contenders. Saturday’s game in Baton Rouge was supposed to be one of the better games all year, but we expect LSU (now ahead of Auburn on our Top 25 at No. 11) to have vengeance on their minds after seeing Auburn’s struggles so far and remembering the 41-7 loss last year in Jordan-Hare. Whether it’s a close game depends on if Auburn took last week’s humiliating near-loss as a wakeup call. Will Muschamp will have to figure out how to stop Leonard Fournette, who had 28 carries last week for 159 yards and three touchdowns.

No. 1 Ohio State should have no problem putting away Northern Illinois. Same with our No. 2, TCU, as they host SMU. Michigan State jumped 3 spots in our Top 25 to No. 4 after upsetting Oregon, which fell from No. 6 to No. 16 (the Spartans play Air Force while the Ducks will take out their frustration on Georgia State). Baylor remains at No. 5, followed by USC, Georgia, and Clemson (who play Rice, Stanford, South Carolina, and Louisville respectively). Louisville, by the way, is 0-2 for the first time since 1998 after being upset by Houston 34-31 last week.

In this week’s issue, we shared the Conference Breakdown through week three, ranking on home attendance last season, the largest attendance increases from 2013-14, the Football Bowl Subdivision Standings, the Football Championship Series standings, our Kickoff Playoff Seeds (including the first four projected out), our Power Ratings for this week’s games, and the schedules and results for every FBS team (and select Division I FCS schools).

When you subscribe to The Kickoff newsletter, you get all of this information delivered to your email inbox on Monday mornings or a printed version delivered to a physical inbox during the week.  To learn more about what you get, visit https://thekickoffstore.com/the-newsletter/ and to subscribe, visit https://thekickoffstore.com/subscriptions/individual/

For a limited time, we’ve extended our special so that when you buy one First Class or PDF subscription to The Kickoff, you can get one FREE PDF subscription to give a friend. If you are a business owner looking for a great way to keep yourself in front of your customers, check out our business subscriptions at https://thekickoffstore.com/subscriptions/business/

Also, test your knowledge of college football by participating in our Thursday Throwdown questions. We’ll see whether we can stump you (using Google to look up the answer is like under-inflating a ball to win a playoff game, but we don’t have access to your search history – thank goodness for that!)