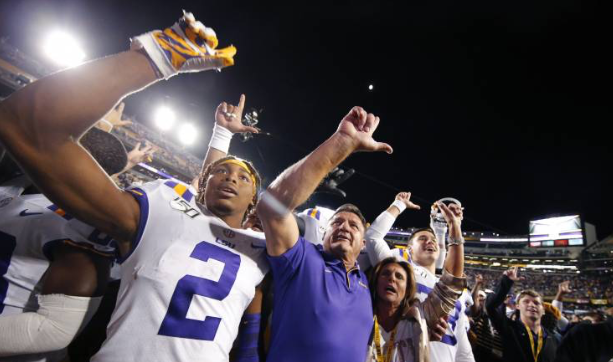 Three of the top 11 teams in the country went down over the weekend, most notably Georgia, who lost in double overtime against unranked South Carolina.

The result? The Bulldogs tumbled from #3 to #10 on the Associated Press Poll. Ouch!

Things also aren’t looking so hot for the previous top team in the country, Clemson, which fell from #2 to #3 after beating Florida State 45-14. Ohio State dropped a spot to #4 after beating Michigan State 34-10.

The Florida Gators fell two spots to #9 after being convincingly beaten 28-42 by the new #2 team in America, LSU. The Tigers play unranked Mississippi State next weekend, then host #11 Auburn before the real showdown on Nov. 9th against #1 Alabama in Tuscaloosa.

What a Weekend of College Football!

Preview of this Week’s Issue of The Kickoff

In The Kickoff’s latest issue, we have our own Top 25 based on how we think teams are performing and their prospects for the rest of the season.

The top 7 teams on the Kickoff Top 25 are 6-0, as well as five other teams farther back in the poll.

In this week’s Kickoff issue, we reveal the most improved teams by Kickoff rating through issue 8, comparing their preseason ranking to where we are today. We also have the Conference Breakdown, News and Notes, Weekend Superlatives, FBS and select FCS standings, Division 1A FBS Standings, Average Margin of Victory leaders, kickoff times and television schedules for this week, Opening Over/Under Odds and our picks, Opening Concensus Odds and our picks, and our comparative Power Ratings for this weekend’s games.

You can subscribe to our college football newsletter to see our picks for these and other games, along with our Power Ratings for consulting when deciding your own picks.

Enhance Your College Football Experience with The Kickoff

If you are looking for the best statistics to help with your college football betting, or you simply want to know which team is favored to win which game, look no further than The Kickoff.

Learn more about our special Buy One Get One Free Subscription special (now discounted 30%) so you don’t miss out on any more action. We still have 9 issues left to publish this season, covering all of the action through the national title game in early 2020.