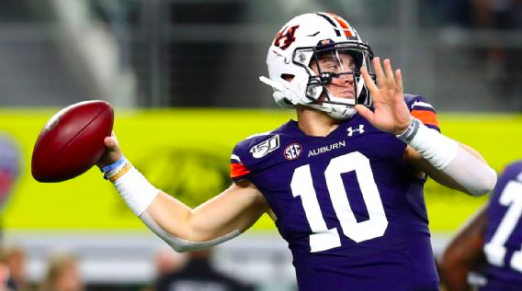 Repercussions of Week One College Football 2019

Issue 2 is out this morning in the inbox of PDF version subscribers. How great was it to spend your Saturday parked in front of a TV watching a day full of exciting college football? From shocking upsets in Tennessee to that suspenseful last-minute Auburn victory over Oregon at Jerryworld, there’s plenty to talk about around the watercooler today.

Take advantage of The Kickoff’s Buy One Get One Free Special.

Reflecting on Week One

The marquee matchup of Week One was Oregon vs Auburn, where true freshman Bo Nix brought the Tigers back from what looked to be a humiliating defeat to make a touchdown pass with only 9 seconds to play. This kid is one to watch. For the second year in a row, the Auburn Tigers take down the Pac-12’s highest-ranked team on a neutral field in Week 1.

Week One also saw a truly humiliating defeat in Knoxville, where Georgia State beat the Tennessee Vols (wouldn’t you have loved to have bet against the Vols in that one?). South Carolina, Ole Miss, and Missouri also faced early season gut checks in the SEC. Florida State also showed they still have work to do after a close loss to Boise State. BCU also upset Virginia Tech.

On the other end, Oklahoma’s Jalen Hurts and Ohio State’s Justin Fields made memorable debuts. We have their full stats in this week’s issue.

The Impact on our Kickoff Top 25

The AP Poll is usually released on Sundays during the season unless ranked teams have not finished their games. Because there’s a game on Labor Day night, both the AP and Coaches Polls will be released on Tuesday. It will be interesting to see how they react to the weekend’s activities.

Visit our Facebook Page on Tuesday to answer the weekly Trivia question, which can be found in Issue #2 if you want a head start.

Make The Kickoff Part of Your Football Fun this Fall

We are in store for an entertaining weekend of college football action. Don’t forget to have your issue of The Kickoff there with you to enhance your enjoyment of the games.

If you haven’t subscribed yet, we encourage you to take advantage of our Buy One Get One Free Special