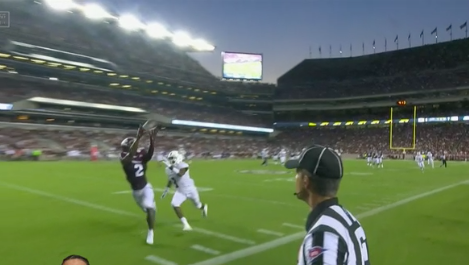 Both teams in this weekend’s marquee game of Week One in college football, #11 (#13) Oregon and #16 (#18) Auburn, have hopes of reaching the College Football Playoff. For one of them, that dream may die.

As we write this on Friday afternoon, we anticipate tonight’s 7 pm ET kickoffs of #18 (#17) Michigan State versus unranked Tulsa in East Lansing and #19 (#25) Wisconsin taking on South Florida in Tampa. A quick reminder that our poll may vary from AP’s rankings and are specified in parentheses next to the AP ranking.

A Closer Look at Oregon vs Auburn

In The Kickoff’s first issue of the season, we ranked Oregon #13 and Auburn #18 on the Kickoff Top 50. We’ve also given the Ducks a slight edge in our Power Ratings. The Tigers are four-point favorites in the latest Oregon vs Auburn odds, while the over-under for total points is 55.5.

“Auburn brings back 14 starters from last year, and the son of former Auburn quarterback Patrick Nix was the top-rated dual threat quarterback recruit in the Class of 2019 and beat out redshirt freshmen Joey Gatewood in fall camp for the job. Nix, who set several Alabama high school records, was named to the Football Writers Association of America Freshman All-American Watch List and will become the first true freshman quarterback in 73 years to start a season-opener at Auburn. Meanwhile, the Tigers should have one of the nation’s top defensive lines, led by preseason All-SEC first-team selections Derrick Brown and Prince Tega Wanogho, both seniors.”

However, Auburn has often been a question mark at the start of seasons, either exceeding expectations or falling flat. Plus, Oregon has its own weapons, returning 17 starters, including senior quarterback Justin Hebert, who “might have gone No. 1 overall in the 2019 NFL Draft if he had declared, but opted to return to Eugene for ‘unfinished business.’” Hebert is a legit contender for the Heisman Trophy, which makes this a contest between him and Auburn’s stout defense.

The Kickoff named Derrick Brown to our First Team All-Americans, along with Oregon Lineman Shane Lemieux. We have Hebert listed 7th on our Heisman contenders, and a win against Auburn would bolster his stock as the season begins.

Elsewhere this Weekend in College Football

Other games to watch for this weekend include:

Make The Kickoff Part of Your Football Fun this Fall

We are in store for an entertaining weekend of college football action. Don’t forget to have your issue of The Kickoff there with you to enhance your enjoyment of the games.

If you haven’t subscribed yet, we encourage you to take advantage of our Buy One Get One Free Special