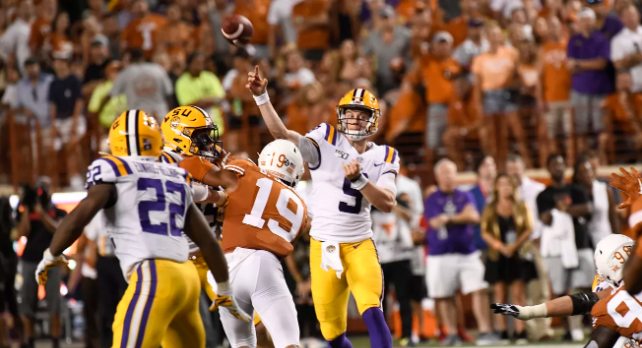 It was another great weekend of early-season college football with some notable upsets and Heisman contenders continuing to build their résumés.

Stanford lost to USC, Clemson proved they deserve their top ranking, UCLA starts 0-2 again, Nebraska’s loss to Colorado lowers expectations for the second year of the Scott Frost era, and Tennessee… well, let’s just say that UT Chattanooga has to feel better than they usually would about going into Neyland Stadium to face the Vols.

In one of our Games of the Week, LSU Quarterback Joe Burrow was 31 of 29 for 471 yards, 4 touchdowns, and one interception, while Tigers Wide Receiver Justin Jefferson had 9 receptions for 163 yards and 3 touchdowns. Ohio State’s Justin Fields was 20/25 for 224 yards and a couple of TD passes, along with 42 rushing yards and 2 more TDs on the ground.

Changes in the Top 25 after Week Two

On the Kickoff Top 25, Ohio State moved up one spot to #3 after shutting out Cincinnati 42-0 while Georgia fell to #5 for allowing Murray State to score 17 points on them at home.

LSU moved up 3 spots to #4 after beating Texas 45-38. Utah moved up a couple of spots to #7. Michigan slipped 2 spots after squeaking by Army 24-21 at home, while Florida returned to the Top 10 as the 9th ranked team in the country after shutting out TN-Martin 45-0 at home.

Comparing our Week Three Top 25 to the AP Top 25, Clemson and Bama obviously remain locked at the top, Georgia remains their #3, we agreed on LSU in the fourth spot, then the rest of the top 10 includes #5 Oklahoma, Ohio State at #6, #7 Notre Dame, Auburn and Florida advances two spots to #8 & #9, and Michigan slips 3 spots to #10.

To see how the rest of the Top 25 fared on our poll, subscribe to The Kickoff and follow all season long.

There will be three games on Friday this week: North Carolina at Wake Forest, Kansas at Boston College, and #20 Washington State vs Houston.

More Value for Your Subscription

The season is still early, and it is is a great time to take advantage of The Kickoff’s Buy One Get One Free Special so you and a buddy can continue to enjoy this great resource to enhance your enjoyment of college football Saturdays.

Remember, we’ve added functionality to our PDF version of The Kickoff newsletter so you can click on your favorite team to be taken in your web browser to their official team website for individual player states, ticket purchase, etc.

Also, don’t forget that we have the schedules of each team listed on our website so you can bookmark the page of your favorite conferences and have those dates and matchups handy for reference throughout the season.

You can also find the latest sports stories on this website through The Feed!