Now that the 2018-19 College Football Season is over with the Clemson Tigers claiming the National Championship, it’s time to do a “post mortem” on how the season went, including how The Kickoff measured in terms of our preseason predictions. Of course, you can only be so accurate before Game One, basing your analysis on the prior season’s performance, historic performance over time, the quality of returning and new players, and factors such as the difficulty of schedule, coaching changes, etc. That can all get thrown off if a seemingly difficult schedule ahead is impacted by teams who underperform. That’s part of what makes the off-season so exciting: Trying to look into a crystal ball and determine how things will turn out.

As always, 2018 brought us the share of disappointments and surprises. Once we got into the actual games and Media Days hype turned to Game Day realities, adjustments in expectations naturally followed.

Where We Got It Pretty Much on the Mark

We started our preseason rankings with Alabama at #1 and Clemson at #2, separated by a very thin margin on our Power Ratings. In our Final Top 25 Poll, Clemson (15-0) tops Alabama with 5.4 difference in the Power Rating comparison after watching the Tigers tame the Tide 44-16 in the National Championship Game. It’s a pretty safe bet to put Clemson or Bama at the top of your yearly prognostications. The question now is whether the Tide’s lackluster performance at the end will impact their placement on the 2019 preseason rankings.

We Were in the Ballpark

We Didn’t See That Coming

We didn’t have LSU, Texas, Texas A&M, Florida, Washington State, Kentucky, Fresno State, Syracuse, Army, Utah State, Iowa State, Northwestern, in our pre-season Top 25, but we weren’t the only ones surprised by the success of these schools in 2018.

A Season these Teams Would Rather Forget

It’s important to remember that our Power Ratings can often include minuscule differences between very talented teams. Nevertheless, comparing them in chronological order at Season’s end can give a sense of how schools ended up performing in comparison to the rest of the field.

Look for our Next Issue on February 8th 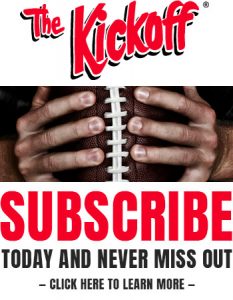 We would like to thank everyone for helping to make our 68th year successful. We hope you enjoyed the season as much as we enjoyed spending it with you. Stay tuned for our recruiting issue next month.

We are offering Buy One Get One Free Email/PDF Subscriptions for 2019, so go ahead and get yours taken care of today. We look forward to seeing you next fall!

Let us know how your picks went this year!